Recently, I have started using KDE 4.3.1 after it came in Gentoo stable tree. I have been using E17 svn versions for quite some time now. I found that with E17 the cpu is relatively cooler. Of course, my benchmarking is not precise yet it shall provide you an overall view. My system is Thinkpad R60. 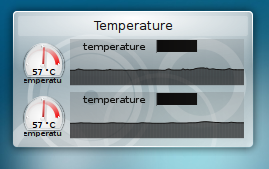 Interestingly, it gradually decreases to about 45 degrees while in KDE it stabilizes at the same 55 degrees.

I decided to do the usual stuff and check. So, I started music play in Amarok (yeah, I use Amarok even in E17.) and compilation. With KDE 4.3.1, temperature reached 60 degrees. While with E17, temperature was within 50 degrees.

After working on my power management, I was able to get KDE to start at about 50 degrees as shown below.

However, E17 proved better once more by starting at about 45 degrees and cooling down to even lower temperatures after that.
4 comments:

Even Google has downtime 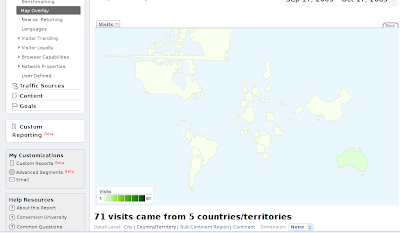 The brightness of the lcd of my Thinkpad R60 was an issue for me because I could only decrease the brightness using Fn+End; but could not increase it using Fn+Home as the Home key was defunct.

I figured may be changing some ".conf" can help me out. I checked out with people at #gentoo. Just as I expected, I just had to write appropriate integer values to

Sed as a handy developer tool

Starting with the man page and experimenting a little, I wrote the following script:


Checking the output, I saw that it worked fine and I could redirect the output to a file to have it saved. Only problem was that it changed occurrences of _ertf_stylesheet_add to __ertf_stylesheet_add, which was completely uncalled for. Digging deeper, I found that I can get rid of this by specifying addresses, i.e. restricting sed usage by specifying line numbers in my case. I wasn't satisfied with this because then I would have to go back and check the line number to ignore. So, I kept looking and finally I found my solution in regular expressions. I typed the following at command line and it worked just fine.


Also, by now I had learnt that adding the 'g' option was safe. Again I had missed on an an essential subtelity. I had forgotten this shall delete the intial double quotes of the error messages which were like:

So, I edited my command as follows.

This removed the double quotes problem. Now, as things started rolling, I wanted to do with sed. Now, in the error messages _ertf_stylesheet_add was usually followed by a colon. However, a few typos were there where there were colons instead of semicolons. So, I edited the sed line as follows.

This did the task with the added problem of replacing

which was undesirable. Now, the problem was I was interested in a conditional replacement. So, I further edited the line as follows.

Here I am using two s/// expressions as this is the only way out. Checking at ##sed on freenode, I found the semantics of s/// don't allow conditional replacement. I was talking about adding this functionality to sed; but that would change sed's regxp flavour. However, this could be achieved easily using perl.


Well doing this task using sed took longer than it would have taken if I had done it by hand. However, since these tasks shall be common (code refactoring), I thought it shall save much time and effort in future.

Actually, the method worked so well that the "future" came in seconds and I was writing multi-line sed scripts to format error messages the whole lib folder. I quickly wrote the following lines followed by some others.