I have been using Mozilla Thunderbird for years now, witnessed many major and minor changes in the software. I started using it on my Windows XP system. Over time I have shifted to Linux. However, Thunderbird is still my preferred email client.

Thunderbird is able to restore my configuration and folders perfectly; but the configuration for plugins does not get restored in a similar manner. The reason for this is plugin management is part of the internals of the software and it is not completely platform independent. As it happened, when I tried using my Windows backup for my Linux installation of Thunderbird, I was not able to install any plugins. Actually, my package management showed that the plugin was installed but Thunderbird did not. Thunderbird showed that the only plugin I had was bdToolbar which is the plugin for BitDefender Toolbar which I had on my Windows installation. So, it was clear to me that Windows configurations of plugins were still there and were blocking fresh configuration of plugins. So, I just deleted the extensions.rdf file and restarted Thunderbird to get my fresh plugin collection.

Well extensions.rdf is kind of internal registry of Thunderbird for its plugins. It was regenerated from existing plugins when I restarted Thunderbird and things were just as I wanted.
No comments:

Recently, I was trying to save a webpage to a USB drive from Firefox. However, each time it was writing a blank document. Initially, I thought it was some problem with my system. After a few trials, I saved the file on my desktop and copied it to the USB drive. Now this worked fine. So I decided to dig deeper.

I found out that gnome-mount is needed to write to USB sticks. Mozilla products are kind of gnome addicts. I installed gnome-mount and it worked fine after that.

I have been looking for the KDE port for about a year. Initially, I was told that Nokia is developing a Qt port of Firefox. So, it would only a matter of time to port from Qt to KDE. I am not sure what happened of that; neither am I much interested in it. Now there is a KDE port of Firefox in the development tree of Firefox. I shall await a release.
No comments:

With the recent 3.5 release, it seems Firefox is catching up with other browsers. With the introduction of new and intuitive features and nice speed, Chrome was a nice alternative to whatever default browser you had before that. However, Firefox is fast again. [Well Firefox 2 was quite fast. Gradually, by 3.0 Firefox had grown sluggish and bulkier.]

This version was a pleasure to upgrade to. Starting from speed to the slight change of shades of the icon, Mozilla developers had done good work in all aspects of the browser. That is the reason of my appreciation through this blog. 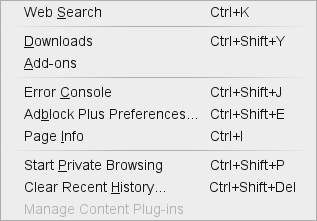 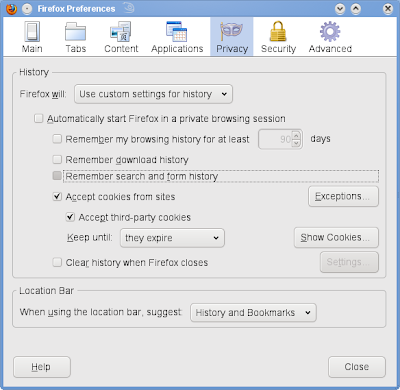 There is a private browsing mode now.

This was an interesting feature.

It was a pleasure to find my Firefox skin Chromifox was supported by this version of Firefox. On top of that, it was improvements to give a more chromy feel.

Will ants take over the world?

Will ants take over the world? Whether the idea is scary or funny is upto you to decide. However, it sure is awe inspiring.
No comments: