A few days back, I was using valgrind on Ertf; when I stumbled upon an interesting bug. On 64-bit Arch linux systems, valgrind 3.5.0-5 was showing a problem with getimeofday(). Finally, I had found a problem with Arch linux [the first since installation.]. However, the very next day,
showed valgrind 3.5.0-6, which had the bug fixed. To nail down the bug, I had tested valgrind with a simple program calling ecore_time_get(). The output is below.

Enlightenment has been quite interesting to me. It has not even got a beta release so far yet I like to use it. That is because, it does things differently. It is very efficient, keeps the CPU far more cooler than any other desktop environment, has nice effects already built-in, and is far snappier than most mainstream desktop environments [I am not interested in comparisions here; so I won't point to any other desktop environment in particular.].
However, there still are some issues [Actually, when you install E17 and read the about dialog, they clearly acknowledge that it is under "heavy development"]. I would like enumerate a few of them here. These are the ones that have concerned me recently while trying to make E17 my regular desktop environment.
#1. emacs bottom-line problem
Well with auto-hide on, the emacs bottom line goes below the screen. Have a look. 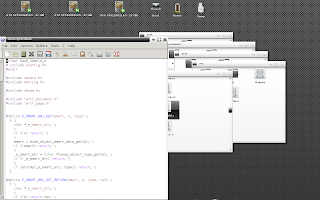 I would rather have it as follows: 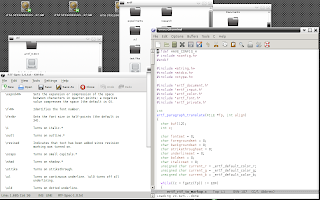 I have started a thread in their developer mailing list about this. Apparently, the issue isn't a serious one.
#2. no create file option in file manager
Well the file manager is good; but not good enough at this stage. It open C source files in read only mode in emacs, which I don't like. It does not have options to create new files yet. 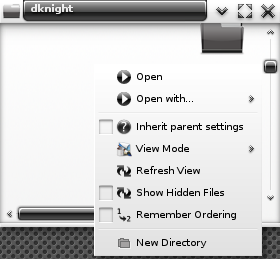 I hope this will be fixed soon.


#3. keystroke problem
This was a strange problem I noticed recently in E17. Well I guess the best way to put it is through an example. Suppose I am using chromium. I have multiple tabs opened. After some time, all of a sudden Ctrl+L does not respond. I any streamed video has taken focus. If so, I click outside the streaming video frame and try again. However, no response again. I click on the URL bar and press delete or backspace to clear the field and enter the new URL. No response. Well basically, with some apps, suddenly keystrokes do not get passed to the apps [There could be alternate explanations.]. I am clueless with this issue.
4. with streaming videos temp rises very fast
While watching online streaming videos, I have noticed the temperature suddenly shooting up very fast. With temperatures around 40-50, its fine; but when it rises till 60 it becomes alarming. This isn't very serious though as the temp falls down after streaming; though at a much slower speed.
Overall, E17 is nice. It is nice to note that E17 keeps with latest development in software. For now, it is bleeding edge; however I suggest give it a shot before believing anything about it. Its a nice experience.
10 comments: